If you have already started your search for a diamond, you will undoubtedly have come across the term ‘inclusions’ or ‘impurities’. If you have the perfect color and cut for your diamond, the final hurdle that stands between you and the ultimate sparkle is inclusions, which are explored in the clarity grading area of diamonds.

Understanding what inclusions are, how they are formed and the varying types of inclusions will bring you one step closer to unlocking diamond purity perfection.

As diamonds are formed naturally in the earth, almost all diamonds will contain an inclusion in one form or another. An inclusion is a ‘birthmark’ within the diamond. Anything on the surface of the diamond is referred to as a ‘blemish’.

Although seen as a flaw, inclusions make each diamond unique. A common misconception is that an inclusion only refers to the black marks seen in diamonds. These black marks are crystals within the diamond comprised of the mineral carbon. In fact, there are many different types of inclusion that a diamond can have and not all are formed through natural processes. Each inclusion has a different cause and subsequently a different effect on the appearance of the diamond.

Diamonds certified by the GIA or AGS will include a diamond inclusion plot with each stone they certify. This is a diagram which shows the diamond face up and face down; it then presents the exact position of each inclusion, and a key to indicate what kind of inclusion it is. 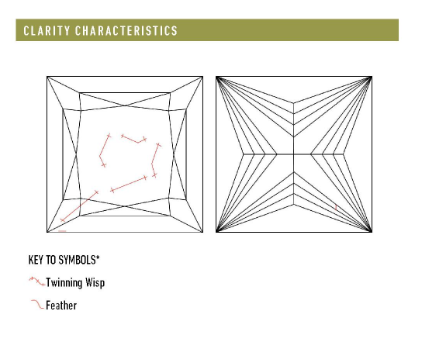 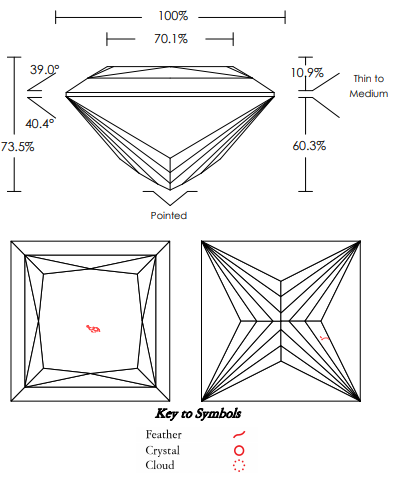 What types of inclusion are there?

Below are the inclusions that may be present in a diamond. 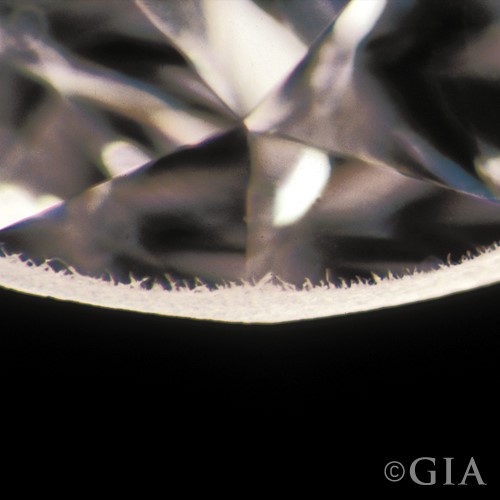 Bearding describes grey, fuzzy hair-like lines that can occur during the cutting of a diamond. These inclusions form at the girdle and extend into the surface of the diamond. A heavily bearded diamond will have a blurry, fringed appearance at the girdle which is a sign of improper cutting technique. 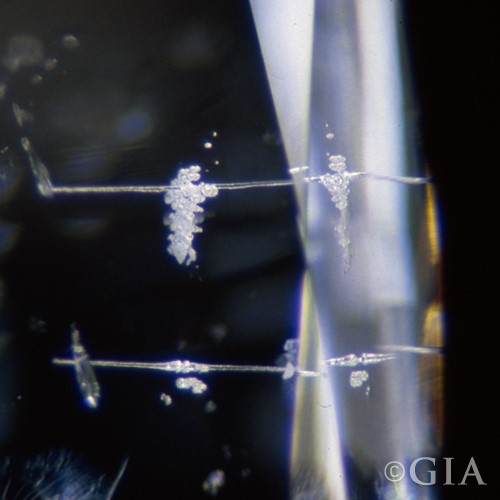 This occurs when a cutter uses a laser to drill into the surface of the diamond and remove a black inclusion. Most laser drill holes are not visible to the naked eye, however multiple laser drill holes can greatly affect the value of a diamond. 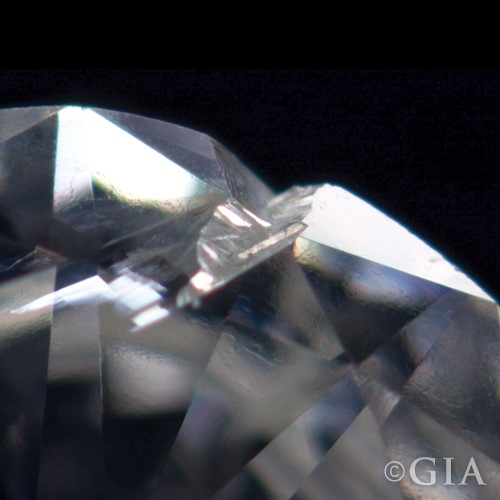 A cavity is a deep dent in the surface of the diamond. This usually occurs when an inclusion close to the surface of the diamond has been dislodged during the polishing process, leaving a deep opening. It is quite literally like a tooth that has lost a filling. In many cases the polisher will leave the cavity, as polishing it away would reduce the carat weight, which has a greater impact on sale price than clarity. Over time, oil and dirt will collect in the cavity making it more of an aesthetic issue. 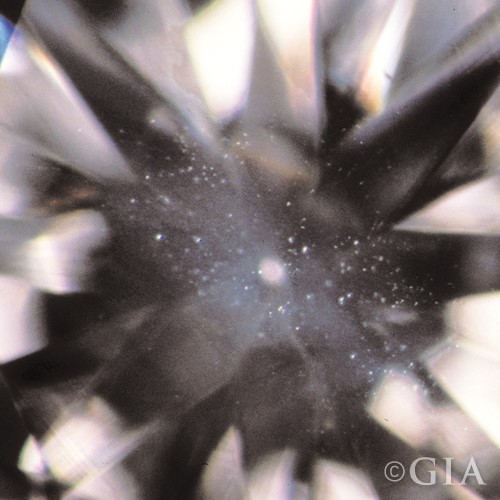 A cloud inclusion is an umbrella term for a collection of pinpoint or crystal inclusions that form close together. If position in the table of the diamond, a cloud inclusion can have a big effect on the appearance of a diamond. 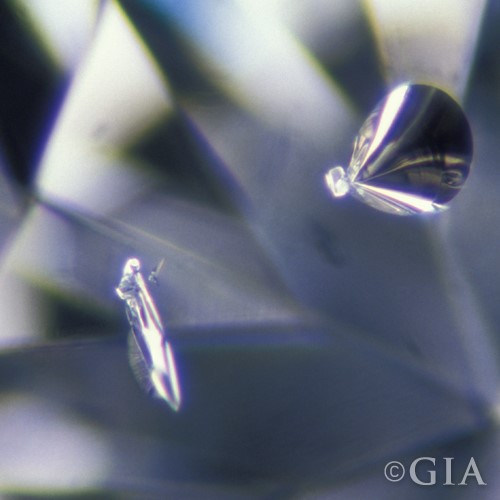 A crystal inclusion is exactly as it sounds – the presence of another crystal within the diamond. These crystals can be various colors, depending on the mineral that was present during the formation of the diamond. For example, black carbon crystals, red garnet crystals, green peridot crystals and so on. 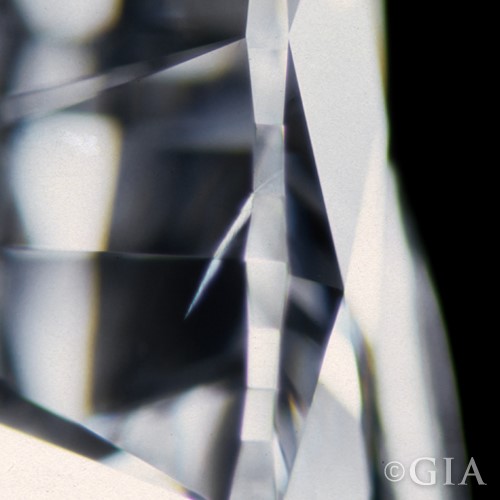 A feather is a small fracture within the diamond. They give a white, featherlike appearance within the stone. While common and easily disguised in brilliant cut diamonds, a feather close to the surface of the diamond can cause durability issues. 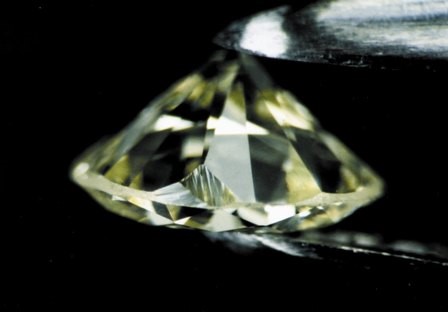 Naturals are usually found at the girdle and are a small section of unpolished diamond. Sometimes these are left simply for the natural beauty that they bring, but usually it is kept by the cutter as a guideline for getting the maximum possible diameter from the rough diamond. They are extremely common. 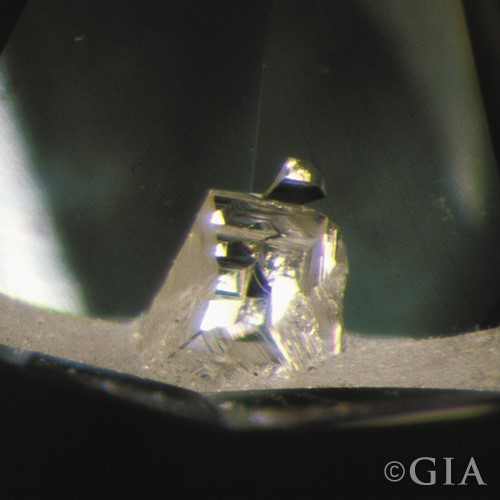 This is an area that is left unpolished, meaning the rough diamond is visible and dipped just below the diamonds surface. These are mostly found near the girdle. They are much like a natural, except they appear just below the surface of the stone, and are usually a sign of a cutter aiming to keep the maximum yield from the diamond. 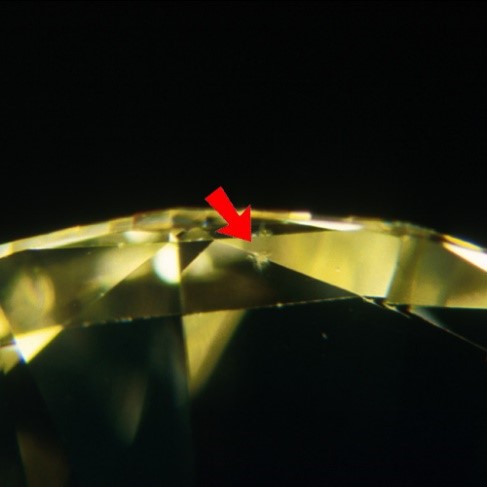 They may the hardest naturally occurring substance on earth, but diamonds can bruise too! A bruise happens when a force has been applied externally to the stone, causing feather inclusions beneath the surface of the diamond. 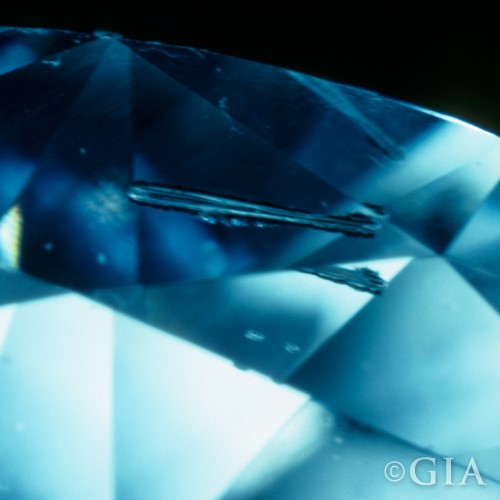 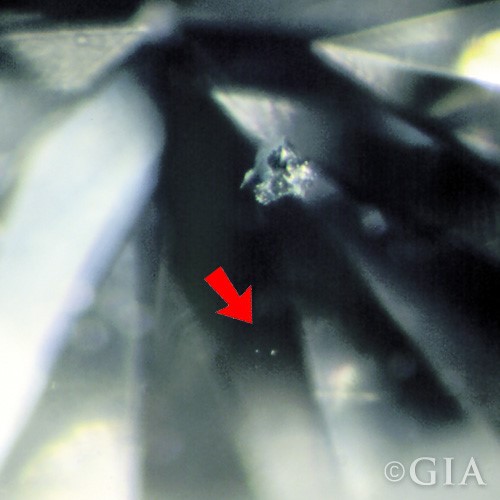 Tiny white or black crystals that appear as a pinpoint inclusion within the diamond. They are usually visible at 10x magnification and appear as a dot. 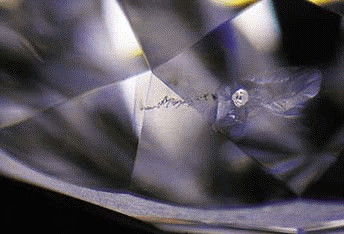 Etch channels can appear as thin, hollow cylinders or wriggly lines within the stone. Etch channels are a scar within the diamond, caused by the intense heat deep below the earth. 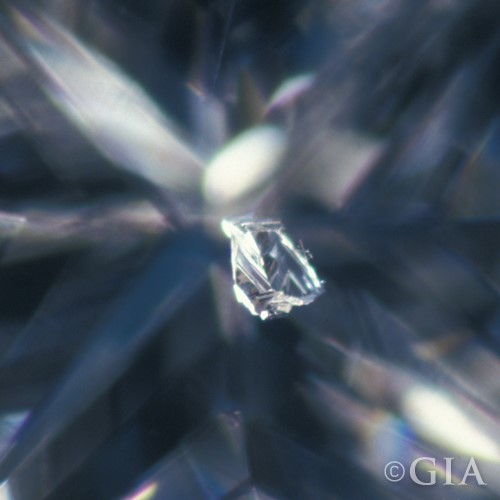 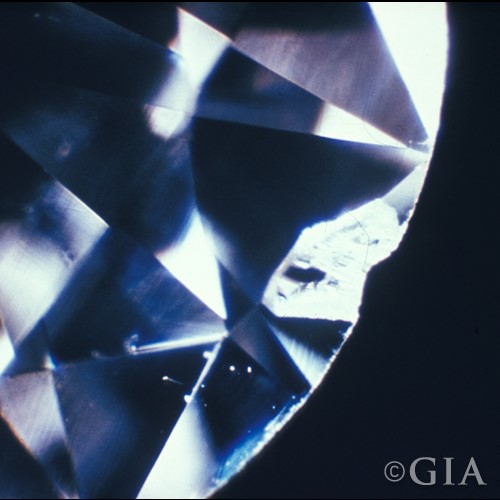 A chip is a small dent or opening on the surface of a diamond usually positioned on the girdle, facet junctions or girdle. Chips are usually the result of knocks or natural wear and tear to the diamond. Shallower chips can usually be polished out with minimal effect to the appearance of the stone. 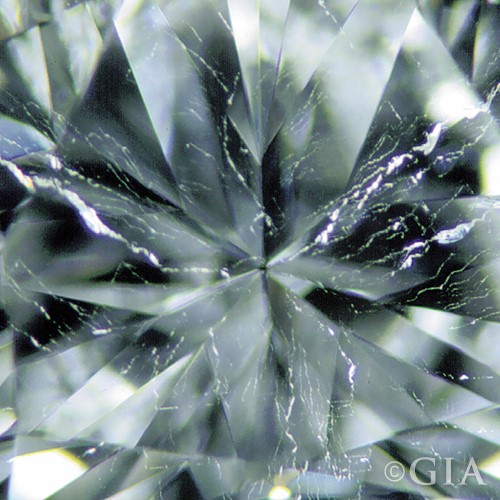 Twinning wisps are a combination of inclusions such as feather, pinpoint, clouds and crystals that create disordered, twirling patterns within the diamond. While a diamond is forming it may stop growing due to changes in pressure or unfavorable conditions; when the regrowth starts in a different direction, twinning wisps are formed. 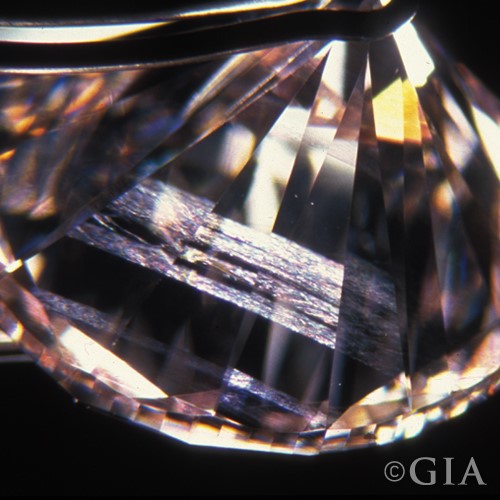 Graining is caused by irregular crystal growth. These milky, blurred internal inclusions present themselves as lines or streaks through the diamond. They can also give the impression of creases within the stone.

Are Inclusions in a Diamond a Bad Thing?

Some diamonds are sold with inclusions as a feature. If the inclusion does not compromise the durability of the stone, then they are simply a unique birthmark within the diamond. In some, very large diamonds the presence of a distinct inclusion may be marketed as an unusual quirk.

Similarly, some diamond sellers may categorize heavily included diamonds, for example you may see them advertised as “salt and pepper” diamonds, which refers to heavy, black and white pinpoint inclusions and crystals.

However, on the whole the presence of inclusions will have a big impact on the value and light performance of a diamond. In terms of beauty, inclusions only become a problem when they can be seen with the naked eye or are positioned in a way that may cause damage to the diamond further down the line. Always choose a GIA or AGS certified stone to be sure you are getting the most thorough and accurate clarity grading possible.

As noted above, it is vital that you include any inclusions that may compromise the durability of the stone. This usually comes down to the positioning, so be sure to take a look at the inclusion plot map and at the diamond itself under a minimum of 10x magnification.

Most reputable online vendors like Whiteflash, James Allen, and Blue Nile for example will offer high-res imaging of the diamond at up to 20x magnification which is hugely helpful when looking at inclusions. You can also download the diamond certificates where you’ll definitely see the inclusions map.

Beyond this, it is all about finding a diamond that is ‘eye-clean’ meaning there are no inclusions visible to the naked eye.

You may be wondering why these diamonds look so different considering they are both SI1? Whiteflash reject the vast majority of SI1/SI2 diamonds and do not add them to their website because they only stock the best of the best diamonds. The leftover diamonds go with James Allen and Blue Nile usually which is why they have such large collections.

Whiteflash put their money where their mouth is especially with their A CUT ABOVE diamonds. That said if you don’t have the budget for Whiteflash, there are still some great diamonds for sale with James Allen and Blue Nile

Both of these round brilliant diamonds have a GIA clarity grading of SI1. This is defined by the GIA as a diamond with inclusions that are noticeable to a skilled grader beneath a 10x magnification loupe.

This is why it is so important to view the diamond images before you buy. Choosing a VVS clarity grade will ensure it is eye-clean but will also cost a great deal more than an eye-clean SI1. A little extra work can save you thousands in the long run.

Naturally formed inclusions are a testament to the extreme and seemingly miraculous conditions required for a diamond to be created within the earth. They are little parts of the diamond’s journey, eternally captured within the sparkling facets of the stone. Small, non-damaging inclusions are nothing to be concerned about.

If you are in the market for a diamond, be sure to take the time to assess the positioning of any inclusions as this will have the greatest impact on the overall beauty of the stone. Most reputable online vendors now offer the buyer the most advanced technology available to allow them to view the diamond in the best conditions possible.

Once you have chosen your perfect diamond, any small inclusions plotted on the map will be the unique birthmarks, identifying the diamond as yours. There will never be another one like it.