Wedding Rings vs Engagement Ring: What is the Difference?

Buying a Designer Engagement Ring Online, Which Designer is Right for Me?

Getting a Ring Resized – What you need to know!

Wedding Rings vs Engagement Ring: What is the Difference?

Traditions surrounding a wedding and engagement rings will depend on where in the world you are and which tradition you are following. There are significant differences in both style and sentiment when it comes to a wedding ring vs an engagement ring, with each playing a unique part in your commitment to your beloved.

Although there are no ‘rules’ when it comes to proposals and weddings, many couples choose to embrace the symbolism and tradition of the rings; a beautiful reminder of your love and commitment to one another.

The tr adition of a wedding ring is thought to date back as far as ancient Egypt, where couples would exchange braided rings constructed from rope and reeds. Over time, the Egyptians replaced these fragile offerings with rings made from stronger materials such as leather. It is thought that the first metal wedding rings were given in ancient Rome. The Romans gave these rings to symbolise permanence and they were placed on the fourth finger. They believed this finger contained the ‘vena amoris’, the vein of love, leading directly to the heart.

Modern wedding ring traditions are rooted in the practices of ancient Rome, but also Christian ceremony. Traditionally the thumb, first and second finger would be touched by the vicar to represent the Father, the Son and the Holy Spirit before placing the wedding band on the fourth finger to complete the union.

However, the history of an engagement ring does not reach back quite so far. There are mentions of diamond rings being given from around the 1400’s but the modern practice of the engagement rings was created by De Beers, following a hugely successful marketing campaign in 1947. Coining the now famous slogan, ‘a diamond is forever’, De Beers cemented the tradition of engagement rings firmly in our minds.

What is the difference between a wedding ring and an engagement ring?

There are a number of factors that distinguish a wedding ring from and engagement ring, which are as follows:

An engagement ring is given at the marriage proposal. While history traditionally saw a man giving his female partner a ring, this element now has many variations. The ring is worn alone on the fourth finger (usually on the left hand) until the wedding band is given at the wedding ceremony.

Engagement rings are often more elaborate than a wedding band and usually feature precious gemstones. Diamonds are the most popular choice for an engagement ring, however sapphires, rubies and other durable gemstones can also be featured as accents or as the central stone.

This 6-prong diamond engagement ring by Verragio is the perfect example of the ornate designs that popular with contemporary brides to be.

Throughout history, weddings bands have often appeared as plain bands crafted from a precious metal. Yellow gold is the most traditional metal, but modern brides and grooms also choose from platinum, white gold and rose gold. Many modern wedding bands may also feature gemstone accents, metal work (such as beading or engraving) or two-tone designs. 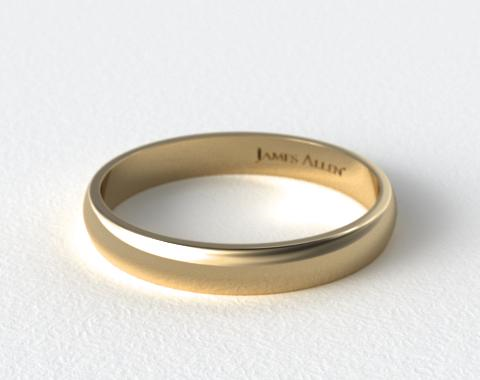 This comfort-fit wedding band by James Allen captures the stunning simplicity of a traditional band.

When should I buy the engagement ring and the wedding bands?

How you choose to buy your rings is entirely personal, however I do have some tips to ensure it goes as smoothly as possible. 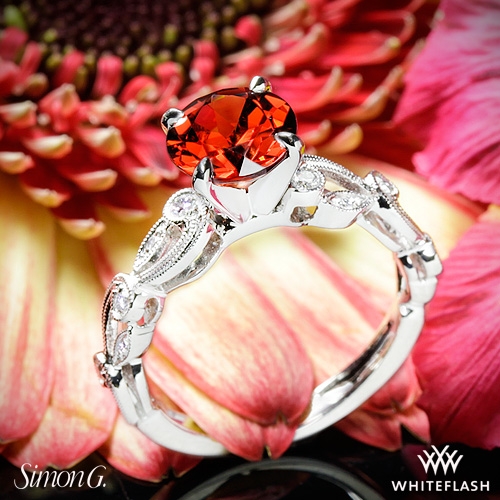 This custom design from Whiteflash shows a garnet taking the place of the central diamond; this is just one of the possibilities when it comes to personalisation.

This Duchess set by Simon G shows that buying your wedding band at the same time as your engagement ring will ensure a perfect match.

Whiteflash have a hugely diverse collection of designer engagement and wedding rings as well as exceptional customer communication. A great place to begin your search. I would also suggest considering Blue Nile, as well as James Allen.

How do I wear my engagement ring and wedding band?

As is the theme with bridal jewelry, there are no set rules. Traditionally, a wedding band sits below the engagement ring and is intended to be worn every day as a symbol of your love and eternal commitment. However, we see many brides who forgo the duel set in favour of one ring which incorporates both sentiments. 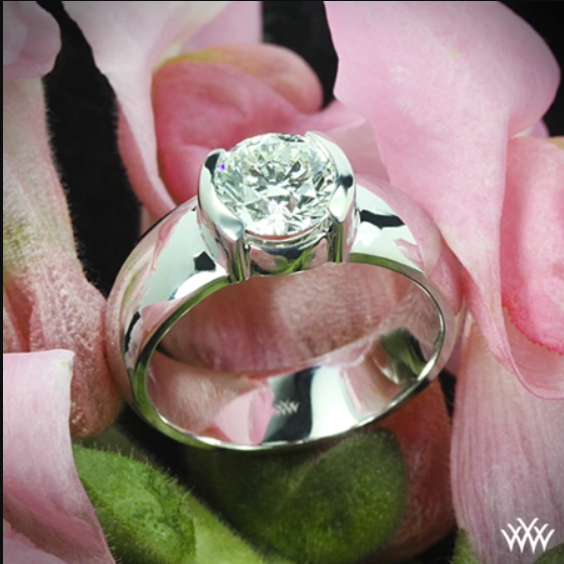 This half-bezel solitaire features a heavy band which would be a great choice for a bride forgoing tradition in favour of one ring to mark her special day.

Shake off any ideas of tradition and choose the rings which are perfect for your taste and lifestyle. Perhaps you adore the romantic glow of rose gold but your intended prefers the contemporary glint of platinum – there is no reason why you can’t both have the ring of your dreams.