How Are Diamonds Made?

What are Clarity Enhanced Diamonds?

How Are Diamonds Made?

Diamonds exemplify something entirely unique. Aside from their symbolism within cultures across the globe, they also represent a perfect marriage of chemistry, physics, craftsmanship and art.

The journey of a diamond from the earth to your finger is an enchanting one and for many buyers and enthusiasts, a little understanding of a diamond’s remarkable creation goes a long way towards understanding their enduring appeal.

How Are Natural Diamonds Made?

Diamonds are formed deep below the earth’s surface in an area known as the mantle. The mantle (which is around 100 miles below the earth’s surface) separates the earth’s exterior from its molten core. Within the mantle are cratons; cratons are pieces of continent that have been stable for billions of years. Their stability and strength make them the best environment for diamonds – you will notice that cratonic areas (such as African and Australia) are the biggest producers of diamonds in the world.

Before the earth became habitable, temperatures rose to 2,000 degrees Fahrenheit and immense pressure built to over 725,000 – 850,000 pounds per square inch. This pressure and temperature modified the molecular structure of graphite, changing the covalent bonds between the atoms and resulting in a diamond. 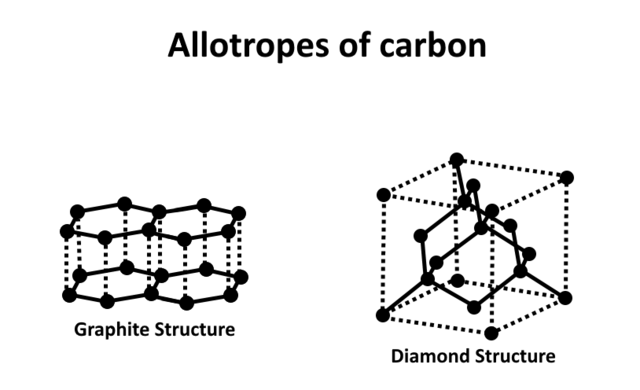 In a diamond’s covalent structure, the carbon atoms have a tetrahedral arrangement and each carbon atom is joined to four other carbon atoms by covalent bonds. These strong bonds give diamonds a rigid structure and exceptional hardness (10 on the Mohs Scale).

The Myth: Diamonds are made from coal

The Truth: Coal is formed by plant debris; given that most diamonds were formed long before plants were able to grow on the earth, scientists have ruled out coal as having any significance in the formation of a diamond.

Diamonds travel from within the earth to the earth’s surface via volcanic pipes (typically kimberlite pipes). Diamond mining is an expensive and challenging process; with some mines up to 600m deep, it requires costly tools and overwhelming man-power. However, without volcanic eruptions, we would not be able to access diamonds at all. Nature and man come together to release diamonds from within the earth.

The geological process of subduction is another way diamond can be formed. When one tectonic plate is forced beneath another and sinks into the earth’s mantle, it creates a subduction zone. Plates include both oceanic and continental crust, but if either is carrying materials rich in carbon (limestone or marble, for example) they melt under the ferocious temperatures to create diamonds. 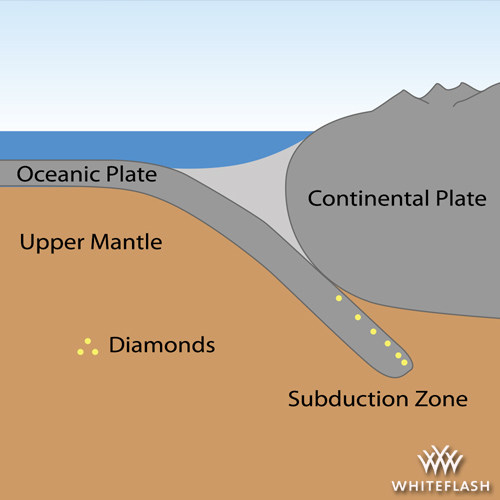 Diamonds formed in this way tend to be very small and not suitable for commercial use.

Diamonds Made by Asteroid Impact

The heat and pressure caused by an asteroid striking the earth will turn any carbon deposits in the impact crater into a diamond. The Popigai crater in Russia is an impact point of an asteroid strike millions of years ago; it is awash with industrial quality diamonds (as oppose to gem quality) however it has not been mined due to the remote location and lack of infra-structure. Nevertheless, it continues to be a place to intrigue for scientists and diamond enthusiasts that is rich with geological heritage.

You may have heard whimsical tales of diamonds ‘coming from stars’ – such is the power of diamond folklore and the mysterious stories passed down through generations. Yet, like so many diamond myths, it is rooted in truth. NASA researchers have detected nanodiamonds in meteorites. These tiny diamonds (billionths of a metre in diameter) are found in meteorites that scientists suggest could be the remnants of early unformed planets. Though they are too small for commercial use, this incredible diamond source demonstrates how diamonds bridge a gap spanning billions of years.

I specialise in natural diamonds, however as we move into a new era of diamond buying, it is pertinent to mention the final way a diamond may be formed; by the hands of man. Lab Grown diamonds can be created using two methods – CVD and HPHT.

The HPHT process (high pressure high temperature) has been used to grow diamonds since 1950’s – the pressure and temperatures of the earth are recreated in a lab to crystalize carbon and create a synthetic diamond.

The CVD technique (chemical vapour deposition) starts with a diamond seed crystal (usually a HPHT crystal). This process uses gas in a vacuum chamber and microwaves – together this causes carbon atoms to accumulate on the diamond seed, thus creating a diamond.

You can read my full guide to lab grown diamonds here.

When buying a diamond, there is already a lot to think about. From cut quality to certification, there is little time to ponder the life of a diamond before it undergoes the cutting process. However, these remarkable gemstones have retained their mystique and appeal for centuries. Understanding the seemingly miraculous conditions it takes form diamonds is a step closer appreciating their unique properties and unravelling their many mysteries.

If you’re looking to purchase a diamond however, please get in touch with directly for an expert consultation. I would also highly recommend reading some of my reviews, as I start I recommend James Allen, Whiteflash and Blue Nile. 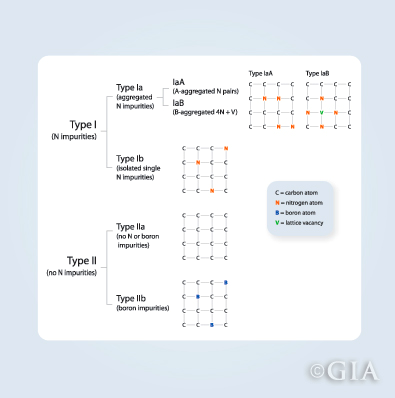